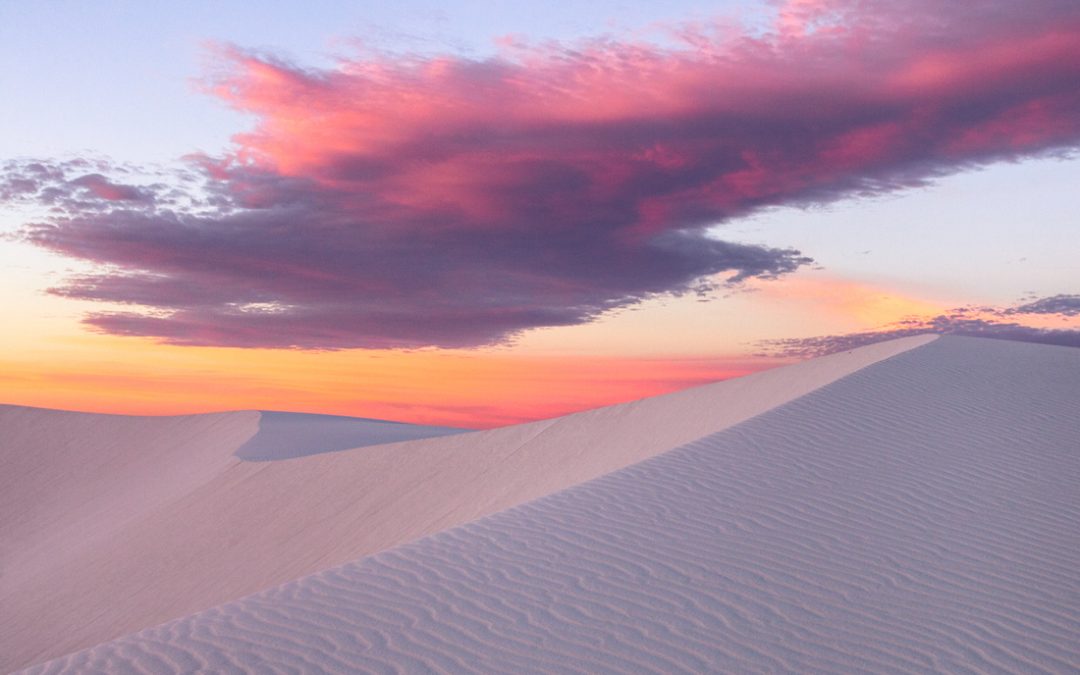 One of my favorite things to do when I lived in New Mexico was to go winter camping in White Sands National Monument.

The drive from my home outside Santa Fe took around four hours. The journey, via highways 285 and 54, takes you through some small New Mexico towns like Encino, Duran, Corona, Carrizozo, Tularosa. There is not much traffic on those roads. You have time to think. Ranchers in their pickups in the oncoming lane give me, in my blue Chevy short bed, the finger wave.  That’s one or two fingers lifted off the steering wheel. Like we all know each other. But there are a couple of stretches, south of Lamy and after Duran, where it’s just you and maybe a chupacabra out there in the rocks, just out of sight.

Sometimes I would overnight at Three Rivers, and take a hike through the petroglyphs.  There is a bighorn sheep with two arrows in its back. Farther along, a young man’s face, placed on a vertical rock edge so that one half looks west, and the other southwest.  And, way out on the trail, overlooking a dry arroyo, are two symbols for water and fish. This place was once much wetter.

I spend the next two nights camping alone in the dunes in White Sands. I have to pack everything in…no car camping or RVs allowed. Only a mile or so in, but up and down over dunes and through sand, humping a backpack with sleeping bag and tent, water and food. And, in another pack, my 4 X 5 camera kit with heavy tripod. On my last trip I got smart and strapped everything on a two wheel dolly!

It’s quite a feeling to be out there, alone, knowing that they have locked the entrance gates. And winter nights are cold, so I scout locations before the sun sets, while it’s relatively warm. I set up my campsite earlier, so now a warm sleeping bag is ready as soon as the sun drops below the horizon. I watch the deep blue earth shadow creep up the pink eastern sky above white dunes that subtly reflect both colors.

Waking the next morning, I find frost around the opening in my sleeping bag–my breath, condensed. I quickly dress and crawl out of the tent, into a low-hanging ice fog that I climb above on a nearby dune, looking for my sunrise photo spot.